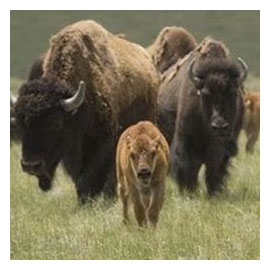 Between 180,000 and 135,000 years ago, a new species crossed the Ice Age land bridge linking Siberia and Alaska, migrating down into the central plains and in time helping transform. By the time of European colonization, they may have spread as far east as the Tidewater along the Atlantic coast and numbered from 30 to 60 million animals. They are the North American bison (Bison bison), and as they gradually evolved, so did the Great Plains.

By the latter half of the 19th century, westard migration and the guns and disease they brought, along with industrial expansion saw those numbers plummet to the point of near exinction. By 1890 fewer than 500 bison existed and most of those were in Canada.

Today, after more than a century of successful conservation management, often driven by personal passion, North America's herds now number more than half a million, 85% of them thought to be in private herds, large and small. The remainder freely roam federal and state ranges like Yellowstone and the Blackhills. In short, while their recovery is assured, their work at restoring a lost ecosystem has barely begun. 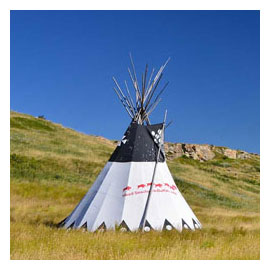 As an Augmented Reality (AR) game, ReWILD!™ aims to make exploring the world outside challenging and fun -- and with luck and skill -- rewarding by integrating blockchain-based assets that can grow and be traded within the ReWILD!™ game; and in time, even across multiple platforms.

Most importantly, the underlying rationale behind the game is to encourage a greater appreciation of and empathy for nature and the wild world around us, as well as promote the values of conservation and collaboration: not to destroy, as in the past, but to heal and restore.

AR: HOW VIRTUAL BISON CAN ROAM THE RANGE 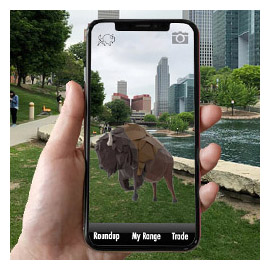 So, how does one "capture" ReWILD!™ digital bison? You start with one of today's smartphones running either Andriod or iOS. These phones come equipped with a camera and video screen. Between the two is a microcomputer that can be programmed to display not only what the lens sees, but data like text and digitally-constructed artifacts, including images, still and animnated, 2D and 3D, objects like 3D bison. That process is called "Augmented Reality," or AR. It is how cute anime characters can appear to be part of the physical world in games like Pokemon Go!.

The ReWILD!™ game App, now in early stage development, works the same way. Lifesized bison: calves, yearlings and adults, not only can materializes on the phone's screen, but even appear to react to the holder's proximity, generating the same flight or fight response of real bison. So, be ready!